Having only met Sir Nick Shehadie once was no impediment to understanding the stature of one of the great men of world rugby.

Under the circumstances, and having heard of his reputation from some of his opponents, there was something of a feeling of already knowing him. 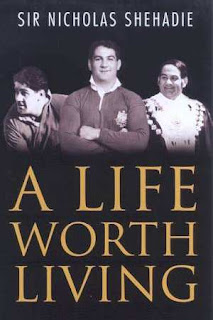 Two men specifically helped in this regard.

One was Southland player, coach and administrator Ray Harper who went on to become a New Zealand Rugby Union councillor and manager of the All Blacks in 1980 who spoke often about playing against the big Australian forward, and then meeting him several times during the 1980 All Blacks tour of Australia.

The other was a little more personal but involved another Southland rugby identity, C.E. 'Eddie' Robinson, a flanker from world rugby's southernmost rugby club Bluff who was an All Black in 1951-52 and who should have been on the 1953-54 tour to Britain and France, but that's another story.

While researching my history of Southland rugby, Something to Crow About, I rang Eddie to see if he would be available for an interview about his experiences with Southland. I knew he was pretty crook with cancer and said to him I was aware he wasn't well and that I would understand if he didn't feel up to it. He said, "No Lynn, come on down, it will be great to chat."

He was fantastic and had some great yarns. We talked for ages.

He said when he was selected for the 1951 tour to Aussie, Bob Duff took him under his wing. He thought it was because they were both prematurely bald. Duff and Shehadie were mates and so when Robinson came on the scene Shehadie always called Duff and Robinson 'Dad and Son'.

Robinson made a big impression on both sides on his first tour, having arranged for a significant number of Bluff oysters to be sent to Sydney for both teams to enjoy after the first Test.

Anyway, early on the return trip to New Zealand in 1952, Australia played Southland just before the first Test of the tour. Southland beat them 24-9, the only provincial side to win against the tourists.

At one of the first lineouts Shehadie went up for the ball and Eddie hit him. Shehadie ended up flat on his back in the Rugby Park mud. He looked up at Robinson and said ' Your bloody old man put you up to that didn't he?"

The loss to Southland could not have been too off-putting, Australia won the first Test 14-9.

It was all part of the banter the trio enjoyed and Robinson recalled they had some great times together.

Anyway, 40 years later as a guest at the NZRU centennial  dinner in Wellington,  Sir Nick's and my paths were about to intersect. He and Tony O'Reilly were the guest speakers.

At the end of the speeches all the knobs gravitated to O'Reilly and Sir Nick was left sitting on his own.

I went over and sat beside him and said "Sir Nick, you don't know me from a bar of soap, but I wrote the centennial history of Southland rugby and one of the people I interviewed for it was Eddie Robinson."

He said, "Dear old Eddie, how sad it was when he died."

I said to him that Eddie had been very sick when I spoke with him, but that "when he talked about you and Bob Duff and the fun you had his spirits really lifted."

And at that Sir Nick broke down and said "Thank you very much for telling me that, it means so much to me." I spent a few more minutes with him and then headed back to my seat.

For all that happened to him in his subsequent rich and fulfilling life, Sir Nick could still be moved by the memory of his rugby mates.

He was a man who defined the spirit of rugby at its very best.

That was evident when in 1983 he was asked to open the Golden Oldies rugby festival in Sydney, the third staging of the event. He was 57 then and when finishing his speech he said he would see everyone at the banquet at the end of the festival. But someone in the crowd shouted, 'Ave a go mate'. So he stripped and played a game.

He said to his new-found team-mates that he would be seeing them. And he turned out on both the second and third days to play.

"This is what rugby is all about," he said. "To start with it brought me out on the paddock again and I had three runs. I enjoyed myself immensely.

"The way in which the 16 nationalities involved here played the game and mixed off the field is a lesson for all the world. Surely, there would be no more wars if we all played rugby like the Golden Oldies," he said.

Australian, and world, rugby has lost a great man.
Posted by Lynn McConnell at 12:56 PM No comments: