Grassroots rugby in NZ gets a boost 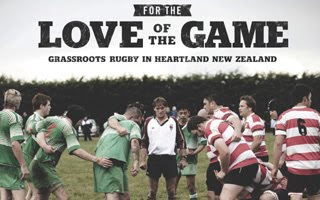 For a country which has books of photographs showing off all its scenery spilling over on shop bookshelves, New Zealand has not been especially well served with photographic records of its national game.

But the times they are a changing.

Photographer Gregory Crow has taken to the road to capture the images of grassroots rugby in New Zealand, the oft-quoted foundation block of the game, and Gregor Paul has been enlisted to add the words.

For the Love of the Game by Gregory Crow and Gregor Paul. Published by Exisle. Price $49.99

The result, in Rugby World Cup year is a satisfying depiction of the game as it exists, largely in the provinces, and which is so vital to the sustenance of the more high profile professional game.

All the usual aspects of the game are covered, with written emphasis delving into both the origins and meaning they give to the game and the result is a seamless combination of picture and word.

Bush produced some more, albeit based on the All Blacks, but his original took in all aspects of the New Zealand game in an outstanding record. It took rugby photography beyond the tour publications that used to follow major tours of the country by the likes of the British and Irish Lions and the Springboks, during the 1960s and 1970s.

Others have followed but more focused on the retail appealing international scene.

This is where For the Love of the Game marks its difference. It is devoted to the club, and it comes through superbly.

The image of club stalwart Ron Rouse, Southland representative and club identity as coach and administrator is a reminder of years spent covering rugby in the south. It is also sad that Rouse has subsequently died, around the time of publication.

Yet his presence in the book is a reminder that his involvement at his club was something replicated at every club in New Zealand. His generation did a fine job in ensuring the rugby message was passed through to subsequent generations.

It is up to those generations to pass the rugby flame – so long as they do New Zealand's rugby future is assured.

Crow and Paul have offered firm evidence that the ingredients for continued survival are there, they just need to be applied in the right fashion. And perhaps it is not without some relevance that the centrepiece of the striking cover photo, grassroots rugby epitomised, is a referee.

These are the people who are the most obvious sign of the health of the grassroots game, if refereeing numbers are down the problems arise.

Rugby is at a crossroads in New Zealand. The professional game has been bedded down, the amateur game is still finding its way. But Crow and Paul have shown the value of the amateurs in a memorable package.
Posted by Lynn McConnell at 3:31 PM No comments: