Part Two: In which outstanding Springboks five-eighths Bennie Osler completes his description of the 1928 tour of South Africa by the All Blacks. 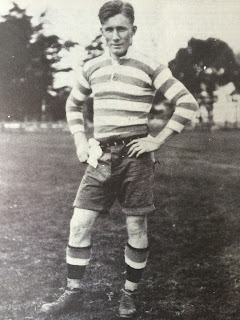 When the All Blacks were in the final stages of their 1928 tour of South Africa they faced Western Province in their third last game, in Cape Town. Heavy rain overnight had the ground awash at 1pm on the day of the game.

Bennie Osler recalled the game on a tape recording that was transcribed and published in The South African Sportsman in January 1967.

"Newlands was a sea of mud and the correct tactics were obvious – the forwards must control the proceedings. We knew that we could out-scrum the All Blacks, who were still persisting with their 2-3-2 formation with one forward having a roving commission.

"Our captain Phil Mostert, decided that he would choose scrums to lineouts whenever he could and that I would use the boot to keep the All Blacks on their heels."

Osler recalled that the tactics 'worked like a charm'. However, while the All Blacks three-quarters were knocked over when they got any ball it wasn't the fault of any problems inside them.

"Bill Dalley, the All Black scrum-half, was a shining exception. He was simply great and I doubt if I ever saw a finer exhibition of scrum-half play behind a beaten pack," Osler said.

"It was mainly due to him – and a bad blunder by Jock van Niekerk – that the All Blacks had a 3-nil lead at half-time. Jock tried to stop Robilliard with a high tackle which the All Black wing shook off with ease and the next moment Dalley was up to take the pass and score."

In the second half the All Blacks lost centre Syd Carleton to injury which reduced the effectiveness of Ron Stewart who had to move to the three-quarters.

The All Blacks defence was stout however. Osler was able to level the scores with a penalty goal and then when wing P.K. Morkel unleashed a sidestep to score a try.

Several times Osler looked for a dropped goal only to find the All Blacks keen to deny him.

"We were seeing so much of the ball though that my chance had to come, and it did. I was going to try the blindside of the scrum when I noticed the entire defence swinging across to cut me off. I turned quickly on my left instead and ran a few yards infield.

"The posts were right in my sights and I even had time to aim deliberately before letting fly with my right boot. The sodden ball did not lift too easily but it somehow spun over the crossbar for four points," he said.

Soon after the final whistle blew on the All Blacks' fifth tour loss 3-10.

Hopes were high that the Springboks would do likewise in the deciding fourth Test.

But as Osler recounted the Springboks went into the Test 'just a little too confident and too complacently sure of ourselves'.

"Our mental attitude to the last test certainly played a big part in our defeat, but it was certainly not the only reason for the hiding we got. Oh no, that would be very unfair to the All Blacks' great performance that day.

"They staged one of the most glorious fight-backs in the history of rugby in that final test and deserved every bit of credit for winning," he said. 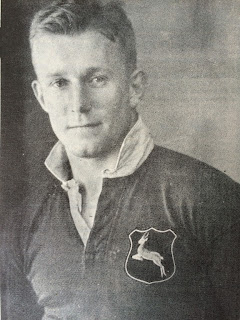 Osler noted it was the only Test in which Mark Nicholls, the vice-captain and veteran five-eighths, played.

"Why this player was so consistently overlooked throughout the tour I will never know, but we Springboks were certainly grateful that Mark did not get more opportunities against us.

"He gave such a masterful display that wet and miserable day at Newlands that I must rate him the finest fly-half I ever played against – on that one solitary performance.

"It was virtually a repeat performance of the first test of the series with the one important difference that this time the All Blacks wielded the whip. Their forwards came to light with a glorious performance and Nicholls dominated the match with his boot."

While the Springboks scored a first half try to J.C. van der Westhuizen, converted by Osler, Nicholls kicked two penalty goals to give New Zealand the half-time lead 6-5.

"In the second half the Springboks were hammered into the ground. The All Blacks held us even in the scrums and controlled the lineouts and the loose with some of the most fiery determined play I ever saw from any pack of forwards.

"Their dribbling rushes were difficult to stop and from one of them Swain got a try and then, to really rub it in, Mark Nicholls put over a beautiful drop goal to make the final score 13-5 – and we were very fortunate that the margin was not bigger."
Posted by Lynn McConnell at 5:56 PM No comments:

Referees too often miss the point

Have referees in Super Rugby forgotten some of the basic tenets of the game?

After watching Round Six action over the weekend you can't help but wonder.

In one instance a player was two or three metres in front of the kicker. Under the laws of the game that is an infringement and the penalty goal should not be allowed

Given that referees constantly spend time at re-starts, both at halfway and the 22-m line, asking players to get behind the kicker to the point of being pedantic about it, you would think they would at least pay attention at penalty goal attempts.

They only seem to have eyes for the ball, as with much else in the game.

What is going on?

In the same game, and no team is innocent here so the Jaguares are not being picked on, there was deliberate intent of diversionary runners to block players from attempting to line up tackles.

Sadly, there is nothing new in this and it has been going on for years but these are clear and obvious obstructions that are being allowed to continue uninterrupted. The referee on the ground makes an arbitrary decision that a player was not impeded.

Where has one of the great sights of the game, the crash tackler, gone? He has no show of lining up a player from a distance out and delivering a bone-jarring tackle to dislodge the ball and sometimes change a game because someone is deliberately getting in his way to prevent that happening. Why not just call it gridiron, or American football, and be done with it?

The crash tackle, a legitimate tactical option, has gone the same way as the ruck and the four-point dropped goal - down the road, and not always for the better.

Another point. The notion that halfbacks would have to feed the ball straight into the scrum is now recognised for what it always was, a joke, but should that slackness in rulings be allowed to apply to lineout throwing.

In a key moment in the Waratahs v Rebels game in Sydney on Sunday, the Waratahs had a lineout throw which was clearly down their line, yet the referee standing behind the lineout with an unimpeded view did nothing. This was in spite of a roar from the Rebels' side of the lineout, 'Not straight'.

It is often said that the best referees are those who are inconspicuous and who have a feel for the game. Those qualities are not being exhibited consistently enough by referees who are more guilty of being a distraction in the playing of the game.
Posted by Lynn McConnell at 5:07 PM No comments: