Meads had a style all his own

Being an early convert to the Colin Meads, and he was only Colin then, style of speaking, it was a privilege to enjoy the opportunity to engage in two lengthy interviews with him in the last two years. 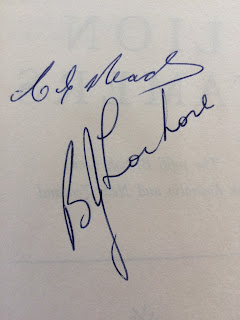 The first was for the book Tony Johnson and I wrote, Behind the Silver Fern, and the second was for the on-going and occasional series of video interviews for allblacks.com known as the Legends of the All Blacks.

The first was before the diagnosis of pancreatic cancer that claimed his life and the second was the last interview he gave before his death. Yet the delivery in his speech from that first experience until his last never varied. He was consistency personified.

That first experience was in the Wool Saleyards building at Gore, in Eastern Southland in early-1968. He and his skipper Brian Lochore were in town to address, if memory serves correctly, an open meeting of the Gore Tin Hat Club. It was an ideal venue befitting the farming background of both men and the community in which they were speaking. They felt at ease with their audience.

They had not long returned from their 1967 tour of Britain and France, a highly-successful tour that changed All Blacks rugby for the better and which it was my privilege to enjoy as a young rugby fan growing up. The scrapbooks compiled during that tour remain in my possession.

A career in journalism, and more especially with a large part of it devoted to sports writing, meant coming into contact with both men on a professional level in the future. Lochore, more especially, because of his roles both as a coach and as chairman of the Hillary Commission at a time when being based in Wellington at The Evening Post.

There was a chat with Meads when he was touring the country promoting the first of the books of his life, written by Alex Veysey, but it wasn't until the two occasions more recently that our paths had crossed.

Two particular stories Meads described on that evening in Gore have stuck with me and seem to have avoided regular inclusion in his after-dinner repertoire.

The first involved an early tour stopover in the United States and some of the All Blacks and their coach Fred Allen, returning from an evening out only to find themselves caught in the middle of a shoot-out in the street. As Meads told the story, the players ducked for cover, or hit the ground, immediately.

When the shooting stopped they dusted themselves off and did a count to see all were present and intact, only to find their coach was unaccounted for. They looked around and found him holding open an ambulance door as the wounded were taken away. Ever the military veteran, Allen was in the middle of where the action was thickest.

The second story related to a rather ikey London hotel the team were staying in later on the tour. It was the custom wherever the All Blacks were staying for the Apple and Pear Marketing board to ensure a case of fresh New Zealand apples were available in a central position in the hotel for the players.

One night a few of the side decided they had enjoyed enough of the products in the apple box so they decided to play some cricket in the hallway with apples as cricket balls. As happens in these sorts of events there was some noise involved.

The following day at training, Allen took Meads aside and said to him a few of the younger chaps had got a little boisterous the night before and appeared to be playing cricket in the hallway. Would Colin mind making sure the young fellows in the side were put through their paces at training as some form of punishment?

Not a problem at all, Meads had replied, relieved that blame hadn't been apportioned to the guilty parties.

Memory also reminds that 'little French bugger Jean Gachassin' got a mention, as he did many times in the future while the Alain Plantefol incident in which the sickening blow that required 14 stitches to Meads' head in the French Test also got an airing.

And at the end of it all there was the chance to get the autographs pictured herewith from both men in the TP McLean book of their exploits in the 1966 series against the British & Irish Lions, The Lions Tamers, McLean's latest book of their 1967 tour All Blacks Magic not having been released.

Like many New Zealanders, probably far more than is appreciated, a young boy from Mataura had a lot to be thankful for in the demonstration of humility, good humour and story-telling charm that Messrs Meads and Lochore provided that night in Gore and on many other occasions subsequently.

They lit their game with a healthy lifetime of lustre and the example they have set will be forever as glorious as the feats they achieved on the fields of the world.
Posted by Lynn McConnell at 9:15 PM No comments:

Tom Pritchard: What a difference he might have made

It is ironic in a week in which New Zealand has lost an icon of rugby in Sir Colin Meads that the death has also occurred of a man who was capable of achieving that same status in our cricket ranks.

I refer to Tom Pritchard, who died today aged 100. 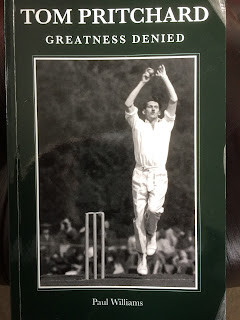 He should have toured England in 1937 with the New Zealand cricket team and would have been in his element had he made himself available for the 1949 side.

Instead, Pritchard, through opportunities provided by a certain German corporal, a No.11 on most team's batting lists by the name of Hitler, A., threw in his lot in county cricket with Warwickshire.

So well did he do that any check of New Zealand's Cricket Almanack will show him sitting fourth on the all-time list of New Zealand bowlers with 818 wickets in his career: Richard Hadlee, Clarrie Grimmett and Sid Smith were those ahead of him.

Pritchard was looked at for the 1937 tour, by a selector who took a train ride to a pre-arranged net alongside the railway line in Palmerston North only to comment afterwards that there were five or six bowlers that were better in Wellington?

Ah, such were the barriers in front of country cricketers in those days. Suffice to say that one country cricketer who did tour, Martin Donnelly, was never in any doubt that Pritchard would have made a difference on the tour.

But if he bore a grudge, Pritchard kept it to himself and played out his career in the thrilling days of county cricket in post-war Britain. He remained for years after until returning to New Zealand to indulge himself in his love of horse racing.

It was at the Levin Racecourse early one morning that I had been coaxed by local sports nut Bernie McCone to come to trackwork to meet Pritchard. It was well worth the effort and I was immediately struck by his bearing and spirit. A few years later it was my great privilege to spend the morning with him at his home preparing a feature for The Evening Post. A more delightful host it could not be possible to imagine.

There's something to be said for those people who have been there and done that when they look at modern trends in a game like cricket. Pritchard was a great supporter of the New Zealand game but like so many his contribution is more likely to be referred to in the history books rather than the coaching manuals New Zealand Cricket might have put together for young players based on the experience and wisdom that men like Tom Pritchard would have been only too willing to dispense.

Why are we as a nation so committed to reinventing the wheel as every new management regime believes it has the answer to the game's issues?

Knowledge has always been power and with Tom Pritchard's death a significant resource has been lost to the game.

But he was an inspirational man to meet and he truly made his mark in his craft. Fortunately his life story has been captured in Paul Williams' book, Tom Pritchard, Greatness Denied.

Sometimes buying on instinct can be hazardous, but I have never regretted the purchase of J.D. Blackfoot's The Song of Crazy Horse.

Having played the LP again recently I did a Google search to see what he was doing these days and came across this clip of him playing an acoustic version of part of his classic album in 1997.

By way of background, J.D. Blackfoot, an American was living in New Zealand and recorded his classic album in this country and it won the RATA (Record Arts Talent Award) Album of the Year award in 1974. 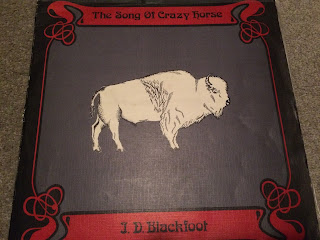 Having always had an interest, and an empathy, with the plight of the Native American peoples, and having just read Bury My Heart At Wounded Knee, by Dee Brown, I was naturally drawn to this album on display in the window of the DIC in Invercargill's arcade linking Esk Street with Tay Street. It had a gray
cover with a drawing of a bison on it. And while earning a reporter's pittance, some things never change, I had to have it and bought it on spec.

It is probably the most satisfying music purchase I ever made. I still have the vinyl album, songbook and poster that came with the original edition. The presentation, music wise, transcends time but not as much as the message does.

It is a powerful story that highlights the United States at its worst, and we live through yet another example of how amazing it can be that a country so powerful, with so much going for it in all manner of ways, can be so misguided in the care and love of its people. As Blackfoot said in the preamble to the piece in this clip: 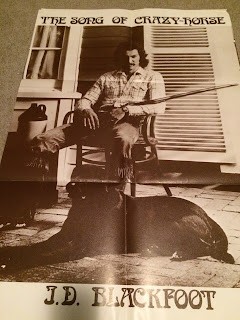 "I found a book the other day so I looked up Red and White to see what it'd say.

"One was a Savage, the other unlearned, like a look in a mirror the tables were turned for history has named you.....Savage!"

The US could do with someone sharing the sentiments of J.D. Blackfoot and Crazy Horse nowadays. As was noted on the back of the songbook accompanying The Song of Crazy Horse,

"Crazy Horse was supposed to have said, 'One does not sell the Earth upon which the people walk'.

"If that line truly came from his lips, in my opinion, he was one of the heaviest men to ever set foot upon Mother Earth."


It's nice to think there's a New Zealand connection with this tremendous recording. All power to The Song of Crazy Horse.


Posted by Lynn McConnell at 11:25 PM No comments: