Fekitoa and Tuipolotu bring exciting qualities to All Blacks

New All Blacks Malakai Fekitoa and Patrick Tuipolotu are determined theirs will not be a short-term stay in the side after being named in the squad to prepare for the three-Test series against England starting on Saturday at Eden Park.

Both are Auckland developed players but Fekitoa has made his mark with the Highlanders in Super Rugby while Tuipolotu has become the first member of the 2013 New Zealand Junior World Championship team to make the Test stage.

Fekitoa said missing out on the Blues had been a significant motivation for him when he was picked up by the Highlanders and he went into the Super Rugby campaign determined to prove what he was capable of. 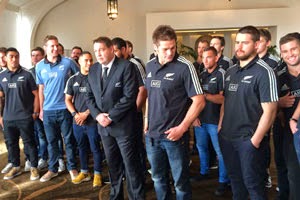 He didn't expect to move as far quite so quickly but was delighted to have the chance to experience the All Blacks environment.

Fekitoa said he had been able to show his capabilities so emphatically as a result of the belief of the Highlanders' coaching group.

"They never told me not to do anything. They just want to make sure I develop and that I am happy and they have given me every opportunity to make sure I perform," he said.

Fekitoa has set his sights high and said he had always wanted to be the best no matter what team he was in.

"Whether I was playing Sevens in Sri Lanka or Sevens in Tonga, I always wanted to beat people and I just want to get into this team and learn as much as I can from the senior guys.

"I just want to learn, develop my game and test myself at this level to see if I am good enough," he said.

His first taste of the All Blacks environment was during the two pre-season training camps in May and he noticed an immediate benefit.

He also felt his exposure to the requirements of top level player had shown that he was not too far away from reaching that standard and it had been a good start for him.

Tuipolotu was still getting used to how quickly events had moved for him in the game.

"It's way ahead of where I thought I would be. I didn't think I would get game time for the Blues at the start of the year, but I am happy to be where I am now and I'll take my opportunities as they come," he said.

In the Blues environment he felt coach Sir John Kirwan had helped him express himself.

"I like to run with the ball, I like to be in open space. JK [Kirwan] has pretty much let me do that in terms of our game plans back at the Blues and that has allowed the coaches to see what I can do," he said.

And being named in Sunday's squad had shown the benefits of that policy for him.

Getting into the camp environment in May with the All Blacks had shown him that talent wasn't enough to allow you to progress. It was all about hard work.

"Coming into the camp you see how the Richie McCaws and Keven Mealamus, and all those guys, do stuff and I sort of try to take a page out of their book to try and improve yourself to be like them," he said.

Now that he has made the step to international level he wanted game time to show that he could stay in the team. He didn't want to be a one-time All Black he wants to go far but with the realisation that he still has a long way to go.
Posted by Lynn McConnell at 10:06 PM No comments:

All Blacks coach Steve Hansen is refusing to follow the media line, both in New Zealand and England, that Stuart Lancaster's team have a herculean task ahead of them in the three-Test series.

Hansen announced his squad for the series on Sunday in Auckland.

"I note that England have been written off but they will have a good side for the first Test. They are the most improved side in world rugby in the last 18 months," Hansen said.

The unbeaten 2013 season was well behind the All Blacks and now it was a case of coming back and reasserting themselves.

"That's a challenge we are looking forward to. Both sides are wanting to perform well ahead of next year's World Cup," he said.

Of his new players Hansen said Fekitoa had been in sensational form and while there were parts of his game that he could improve it was a no-brainer that he should be included in the side.

Tuipolotu was a tighthead lock who got his chance as a result of injury suffered by Luke Romano. But he had the core skills the selectors were seeking and they were looking forward to working with him.

Vito's return had come about because of the increased physicality of his play. He was picking up turnovers, carrying the ball better and making good ground.

"We always knew he was a good athlete," he said.

Kaino's call-up was anticipated given the form he had shown since his return from Japan. He showed he had lost none of his physicality from the moment he resumed with the Blues and as the season progressed he had adapted to the pace of the game and his intensity levels were good.

"I thought last night he was outstanding [in the Blues win over the Hurricanes]," he said.

Steven Luatua missed the squad but Hansen said he knew what the reasons were for that and it was up to him to motivate himself to improve in the same way that Kaino and Vito had done in their careers.

While there was a need to blood new hookers for the side, Hansen said the selectors would not pick players unless they were ready and the two young hookers who have been involved in the side's apprenticeship scheme, Liam Coltman and Nathan Harris, would spend time with the side in their respective regions. If there was an injury to either Keven Mealamu or Dane Coles the selectors would not rule out calling up a player like Crusaders hooker Corey Flynn.

With first five-eighths Aaron Cruden out of rugby for six weeks, and in a well-beaten Chiefs team on Saturday night, Hansen said he played like a player who had had time off, and in a side with some issues at the moment.

However, Cruden had shown in the past that he took time to come back and Saturday's game would have done him some good.

Hansen added that the selectors were already firm in their choice of first five-eighths for Saturday's first Test in Auckland.
Posted by Lynn McConnell at 10:02 PM No comments:

The first in a random series on great sports books. At this stage they are not produced in any specific order. 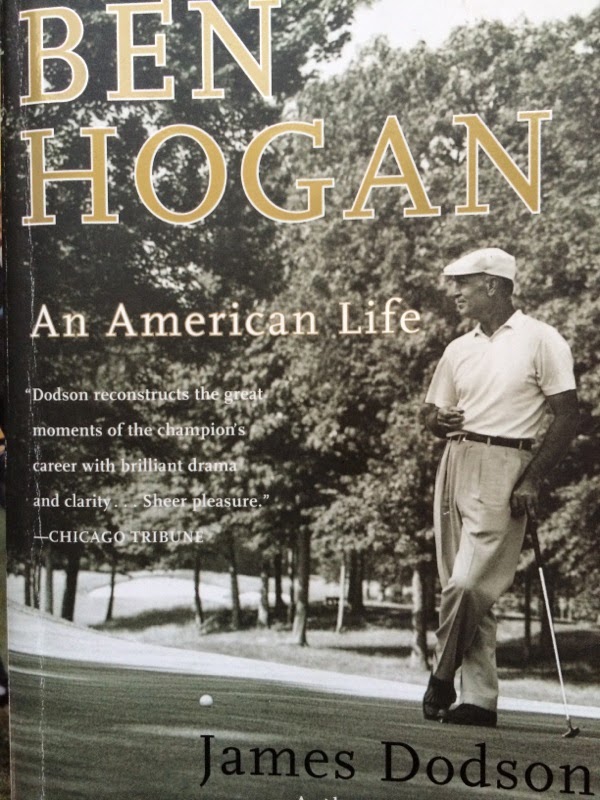 Great American golf writer Herbert Warren Wind once wrote that golf 'had achieved the finest body of literature of any game'. While that statement is always open to debate, and clearly Mr Wind, had little knowledge of cricket while being openly dismissive of baseball's own library, he was correct in observing that golf was well served by its writers.

That point was hit home when discovering, Ben Hogan: An American Life. It had been recommended to me as an outstanding sports book by someone whose opinion I respect and while difficult to locate at short notice, a trip to one of the better annual second-hand book sales in Auckland netted the said volume in very good shape, and even better price!

While Ben Hogan's place among the greats of golf was well known and had been studied on and off over the years in various articles, the full extent of his method, success and professionalism had not been as well understood as it might have been. An on-going interest to one day take a look further into his career was to do with the writing of the man who is clearly the finest sports columnist of them all, Jim Murray. And it was he who provided the archetypal story of Hogan's greatness.

Following Arnold Palmer during a round in a tournament, Murray was on hand when Palmer played the ball into a ditch. Seeing Murray in the gallery, Palmer said to him: "Jim you are always writing about how great Ben Hogan was. What would he do in a position like this?" Murray's reply was succinct. "Hogan would never be in a position like that."

Biographer James Dodson came to the task of Hogan's tale with an impressive folio of golf writing behind him. He also had access to the impeccably kept Hogan scrapbooks. These provided a run down of every tournament Hogan played in.

But Dodson has not just provided a blow-by-blow account of Hogan's career. He has worked his contacts, made enquiries about who might have information on specific aspects of Hogan's life and has built a rounded picture of the man that is so much more than a book on golf.

It is a lesson in life.

Nothing came easy for Hogan. The suicide of his father when he was young left its mark on the young man and the resulting life of hardship and hard work quickly became the trademark of a life in golf.

Again, success did not come quickly. For many young sportspeople who intend a life in professional sport, the lessons of Hogan's development are a superb example of hard work maximising talent. Success was a long time coming for him and it was only when he had added the experience that he became such a hard man to beat - most often after he had been told he may never walk again after his car collided with a bus in foggy conditions.

Such had been Hogan's work ethic that there might almost have been an element of fate that prepared him for his post-accident career, where only the hard work he had already done gave him a template for recovery that left its mark brilliantly on golf's record book.

A solitary man, Hogan spent hours perfecting his game, and his swing, on the practice fairways around Fort Worth where he made his home. Sadly, an eye injury suffered as part of the crash would affect his putting in later years as he battled to get a clear picture of the lines he needed to sink his clutch putts. How much more outstanding his record could have been can only be imagined.

But the message of hard work is exemplified in his story, an example that talent alone is never enough for consistency at the top of a chosen sport.

Hogan was described as a difficult man. Others swore by his loyalty. Some said he was shy, others that he was grumpy. But he had an honourable approach. Much like another great sportsman on the other side of the world, Don Bradman, he felt a duty to answer every letter ever written to him. Although in Hogan's case he could never understand why people cared. He thought once playing in his final Major that he would be long forgotten four or five years later.

He would learn that wasn't to be the case and while he died in 1997, Dodson's book, and those written by others, will surely ensure his legacy is never forgotten. Few will have enshrined it better than Dodson. His warts and all approach with material on Hogan's family, business life and friends, complete the picture.

Sports, sportspeople and sports writing often cop a bad deal from critics, but when quality is represented in books like that James Dodson has achieved, sports, and especially golf, literature, can, to paraphrase Herbert Warren Wind, be in a class of its own.

Posted by Lynn McConnell at 10:18 PM No comments: