Dan Carter - will we ever see his like again? 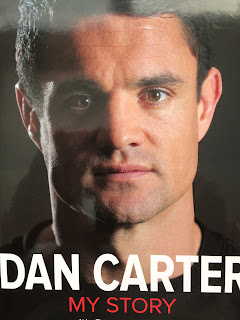 he had it all and, after a superb final World Cup, he left an indelible reminder of his class to be forever remembered at the click of a button in this YouTube age.

Part of his story will also be remembered as a result of his publishing liaison with Duncan Grieve in 'Dan Carter – My Story'.

This book serves as a timely reminder that no matter how gifted, how skilful, how successful a player may be in terms of rewards from the game, there is no replacement for hard work.

It is all too easy in the life of instant gratification that has now beset the world to believe that anyone of the afore-mentioned qualities would be sufficient to achieve a career of brilliance. Wrong.

It takes plenty of work and effort and that is without taking into account the vicissitudes that can be thrown in along the way like injury, self doubt and frustration that as you get older things don't recover quite so quickly.

All have been part of Carter's career and he talks about those moments in an engaging manner which nonetheless makes the point emphatically.

Too often New Zealand rugby fans expect a player possessing the ability to turn on brilliance, as Carter could do, at the drop of a hat. It has been fodder for talkback radio hosts for yonks. They asked why if he could do it in some games why couldn't he do it in others?

Oh that it were so easy.

It is a fact for every glimpse of class a player reveals, it is analysed, scrutinised, dissected, bisected and broken down to the nth degree by opposition analysts. Life becomes so much tougher.

But rugby is a game that offers ways of containing the attention of opposing defences and allowing class to flourish.

For those who had written Carter off ahead of the 2015 season, especially with rivals lining up to potentially claim his place in an All Blacks backline, his innate class enabled him to not only meet that challenge, but to raise the bar ever higher.

It is difficult to imagine a way in which a player could leave a betterimpression for rugby eternity than what Carter achieved through the play-offs stages of the 2015 World Cup. Possibly only the efforts of team-mate and skipper Richie McCaw, under his own scrutiny and pressure in the loose forwards from Australia, come close.

There is some tittle-tattle in the book, the punch-up in Johannesburg with the New Zealand Colts, the taxi ride to London with some team-mates on the 2005 northern tour and a failed business venture, but Carter is not one for generally getting too involved in this sort of carry-on and the book is more about the development and sustenance of a career that provided so much.

It is interspersed with some diary moments of strategic points through the last two years.

Posted by Lynn McConnell at 3:02 PM No comments:

As the name suggests, 'Surfers – A Kiwi Lifestyle', is a book that encapsulates the unique culture that is the New Zealand surfing scene. 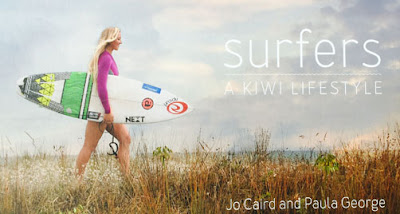 'Surfers - A Kiwi Lifestyle', will appeal most to those who seek to learn more about New Zealand's varied surf culture, or perhaps everyday Kiwis simply looking for a brief reflection on how the surfing scene sits as a subculture to other NZ sports, like rugby.  Moreover, the book is dedicated to detailing the mixed personalities, families, ages and sexes that help make up the rich culture that is surfing in NZ.

Noticeably, the angle of the book is from an outsider's perspective looking in, which offers a unique view sometimes lacking in books about surfers or surfing written from those that have years of surfing experience under their belts. Often authors of surf books overlook certain areas of the surf industry (see learners, first timers, even the old boys) as trying to avoid the cultural cringe that seasoned surfers often feel when seeing another coffee table surf book for sale.

A Kiwi lifestyle is about individuals, from competitive surfers through to weekend warriors, the books does well at covering a large array of different personalities who can be found in line- ups throughout New Zealand. Each interviewee offers their own perspective as to why they are so enamoured with the sport/art form that is surfing.

As an avid surfer for the last 23 years, I can vouch that we have a rich and varied history of characters that help to make up the culture of surfing around New Zealand.

"Out there, sitting in the water, it's hard to tell the company CEO from the tradesmen". As the quote suggests, surfing in New Zealand is a unique pastime. We are a melting pot of individuals who all share a common trait, we love to surf and make the most of our wave rich coastlines. A Kiwi lifestyle paints a unique picture of all the walks of life that make up our surfing DNA.

Surf books all too often walk a thin line of respectability and kookiness.  Inherently and rightfully so, surfers guard their passion of surfing with vigour as our culture has all too often been recycled in mass media as cringe worthy representations of how others perceive 'us' to be.

For the most part, 'Surfers-A Kiwi Lifestyle' walks this line with only a few moments of cringe (in particular, a couple of photos that shall remain unmentioned). The book's strengths lie in the strong array of surfers the authors have tracked down to interview (Matt Scorringe, Tipene family, Tony Baker among them). This gives the book an air of respectability whilst accurately capturing the spirit of New Zealand surfers.

No matter who, what or where you are from, we all share something in common, we all love surfing and are in it for life (except Gary McComick, he's done with it apparently).
Posted by Lynn McConnell at 2:30 PM No comments: